Poet, theater artist. Born 1962 in Tbilisi. His poems and critical articles have been published since 1981 in periodicals. He has published poetry collections: 8 Haiku (1992), Poems - Archae Journal Leaflet (1992, USA, in English), Wandering Droplets (2001), December Nights (2008), Book of Reality (2004, In Russian), Three Green Tea (2004, USA, in English), Sanzona Girls (2014, USA, in English), as well as the novel Feminine / Feminine (2007). He has also translated numerous works by American poets and theoreticians. Since the mid-1980s he has taken part in various exhibitions and theatrical projects in Georgia and abroad. Since 1989 he has been published in foreign journals. David Chikhladze's have appeared in many anthologies and collections, including anthologies: An American Avant Garde: Second Wave The Ohio State University (2002, USA), Salz magazine (2004, Austria), Emergency Gazette (2000, USA), also in many editions in Europe and America: Dagbladet (Norway), Stroker, Missivves (France), Beorama (Yugoslavia), Dekorativnoe Isskustvo; Gumanitarni Fond; Anthology of One Dot Poetry (Russia) and other. In 1994 he received the literaturWerkstattberlin Scholarship in Berlin, Germany.

In 1989 he founded Tbilisi’s first independent gallery Alternative Art Gallery, about which a wide-ranging survey was published that year in America (Kim Levin, Connoisseur, 1989). Since 1994 he has been directing Tbilisi’s Margo Korableva Performance Theatre.

From 2002 to 2004 he collaborated with the New York theatre Repetti Chocolate Factory. In 2002 he took part in the American Living Room festival in New York. His productions as a videographer were: Audit, Drowning Man and Fundamental, and they evoked a good response from New York’s theatrical press. In 2006, in City University of New York, he staged, in English and in Russian, a method for an electronic dictionary of writing processual poems and this method he then used to create two new poems. He completed an internship at the Ontological-Hysterical Theater in New York for the production Wake Up Mr. Sleepy! Your Unconscious Mind Is Dead! by Richard Foreman in 2006-2007.

Georgian visual artist and performer. She received her Master degree in Psychology in 2013 and by 2017 she completed her postgraduate studies at the Center of Contemporary Art – Tbilisi.

She first appeared as a performer in Lava-Dansprodukion’s project Waiting in the Margins in 2014.

Later, in 2016 she herself created the concept of inclusive performance with people with Down syndrome – მეგობART (Eng. FriendArt).

After that, she participated in various projects such as: Inclusion in art: the German experience (2016, Frankfurt, Berlin, Germany); Delokobreva, the theater project (2016); collaborative exhibition Who is this I that can say I? of performance artist Nadia Tsulukidze and curator Lali Pertenava at the State Silk Museum as a part of the project Art Intervention in the Museum and had her Audio-Video installation: “Butterfly Effect” (2016); the exhibition Point of View – a collaboration with Georgian fashion designer Nino Chubinishvili (aka Chubika) and Georgian conceptual artist Kote Jincharadze at the Nectar Gallery, Tbilisi (2016); Performance Days Tbilisi 2019; live exhibition Enclosed Garden, organized by the collective HEROINES (2019); the project of Open Space – Center for Performing & Visual Arts: Dance and Documentary theatre workshop: “HOW CITY MOVES?” etc.

She is the winner of the scholarship of Goethe Institut and also participant of the International Forum – Berliner Festspiele 2020.

At present, Nutsa Iashvili is a performer and artistic director of the Margo Korableva Performance Theatre.

Born May 14, 1990. Tbilisi Georgia. Graduated from the Tbilisi State Academy of Arts in 2012, Faculty of Media Arts. Participated in several group photo exhibitions in Georgia and abroad.

In 2012-2017 she studied at the Shota Rustaveli Theater and Film University of Georgia. She has taken part in several plays Liars; Seagull; Despicables, Dirty, Evil (Free Theater), Turn Back Angry (Marjanishvili Theater), Father (Theater for Adults). She is currently an actress at the Margo Korableva Performance Theater.

Born in 1988, in Tbilisi. In 2010 she majored in Social and Political Science, in Ivane Javakhishvili Tbilisi State University. In 2016, she recieved Master’s degree in Cultural Management. She works on fictional texts. Since 2016, her works are being published in variety of literary editions/magazines. Since 2020, she is a member of Margo Kobaleva Performance Theatre.

Plays episodic roles in several theaters. Works on a project of the Swedish Development Fund, writes video scripts and does framing, which involves merging text and visuals. In 2016 he graduated from the University of Georgia Strategic Communications Program. Experience in video scripting, social media content and copywriting brought him closer to art due to his profession, after which he studied Acting Skills at the Drama School in 2018-2019.
In 2018-2020 he worked as a marketer for the company ACT – global marketing research and consulting company, creating scripts for multimedia activities, writing video scripts, filming and editing. 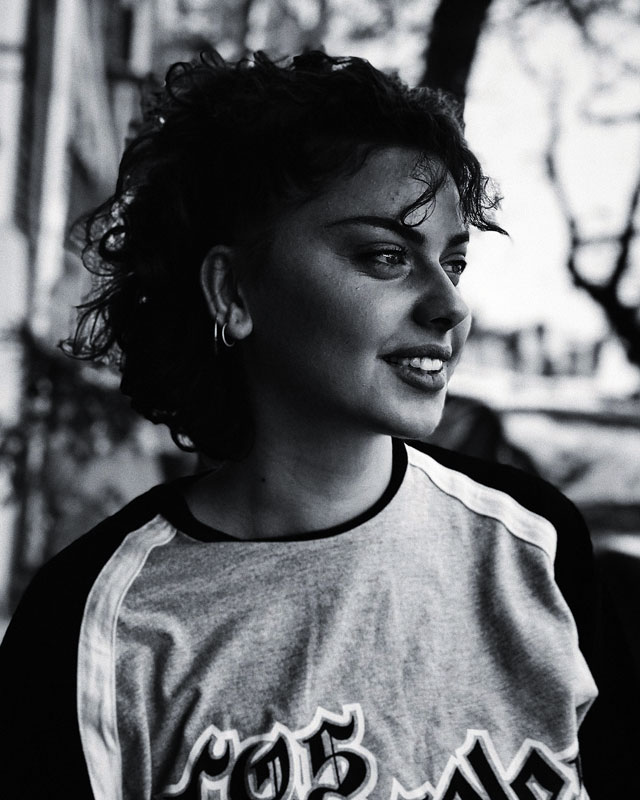 A 22-year-old, student of business, technology and education at Ilia State University, a minor profession – acting skills, which brought her even closer to art, working as an actor in several theaters, making music and is a vocalist, she also paints, constantly trying to find new inspiration. She tried her luck in photography, which turned out to be successful, she enjoys the process, which is constantly changing, and it is this view that she has in photography, “the more I grow, the more I want to deepen my knowledge in the field of contemporary art.

Georgian artist and performer, studying cinematography at Ilia State University to earn a bachelor’s degree. Graduated from the Berikebi theater school. Studied painting at the House of Art. In 2018, she took part in the exhibition Start – paintings animated by innovative technologies and mixed with experimental music. In 2019 she participated in the integrated project for inclusive people Let’s Play.